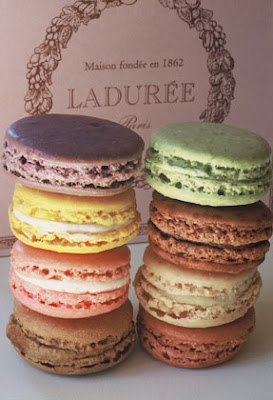 It really is Macaron Day in Paris! Parisians line up at Pierre Herme (not that Hermes), a famous patissier of sleeker style to get their little treat bag of macarons for which they make a charitable donation. Unless you caught a flight yesterday, you missed the 2nd annual "jour du macaron" but you can follow the fun at blog Paris Breakfast . Blogger and artist Carol Gillott booked her Paris trip with timely coincidence (she loves, love all things Paris) and is posting her travel journal , click here to see today's photographs and her gorgeous Paris sketches . Her blog is a leisurely stroll through Paris anytime of year and you can view her lovely watercolours at her Etsy store here. She's away until early April, but follow her along.
There is always a macaron war going on , oooh......the stylish Parisians dueling in a civilized manner over who makes the most delectably flavored meringues! Is that considered a chic fight? You can find the buttercream or ganache-filled treats all over Paris at Herme, Gerard Mulot, Fauchon to name a few, but I still only think of Laduree when I think of these pastel confections. There were two things I had to see in Paris, one was the Laduree tea salon on the Champs Elysees (though there is a debate if the original location 16 Rue Royale is better), the other Chateau Versailles (a short train ride out of Paris, but you know what I mean). I'm trying not to get weepy here as both were too delicious for words, so click here to read more about Laduree and here's a bit of Versailles. 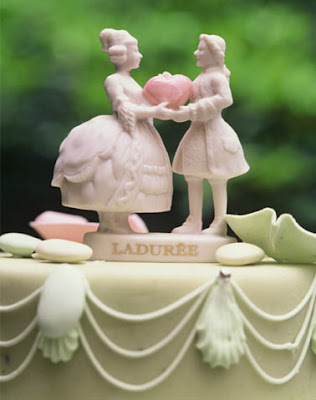 They even have a romantic wedding topper for all the Laduree-mad brides. 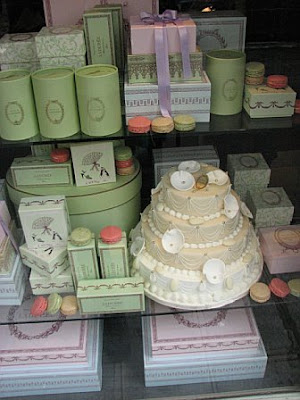 They are famous world-wide for their pastel packaging of all shapes and sizes. You can find all kinds of yummy treats, even have lunch. I wasn't the only woman on the return flight with a Laduree bag on my lap! You score big points for bringing friends a petite box of macarons. Rule number 1 ........you never, ever throw away a Laduree box or bag, it just isn't done! My friend Marie is going in May with strict instructions, here's my list, go to Laduree, then leave directly for airport. They are best eaten within 24 hours, I hope she doesn't forget. 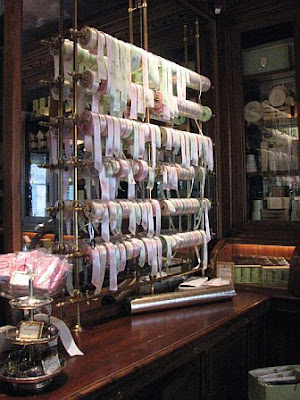 Packaging logo ribbons in all sizes and pastel colours. Laduree's wrap station. Between you and I, the woman who waited on me was definitely impatient with my lengthy selection process. Maybe I should just work there? I would be perfectly content to package up rainbow treats all day long, I would be the nicest, most patient French shopgirl ever! Though I would probably use too much ribbon even for them. 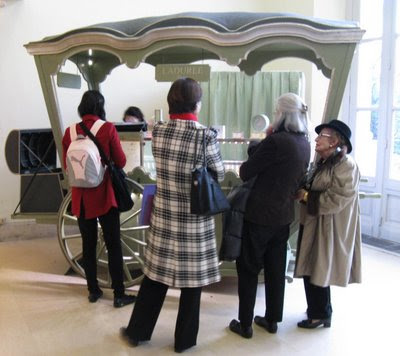 For special events, Laduree wheels out their Versailles-style pastry cart, I wonder if they ever park it at the entrance to Versailles? Wherever they are parked, Laduree sells 10,000 macarons daily, 8 million a year! Both Laduree and Pierre Hermes have a salon in Tokyo, the Japanese are macaron-mad too. Some rumours about a Laduree coming to New York , but nothing yet, but there is one in Harrods in London, Monaco too. 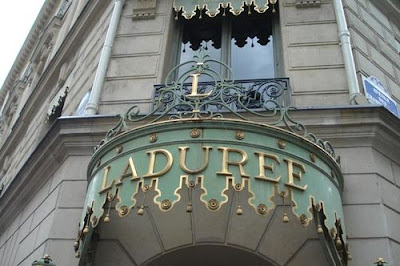 Rule number 2..... do not go to Paris and miss Laduree. There are other pastry shops that carry macarons , but nothing quite like Laduree. French spelling "Macaron", English spelling "Macaroon", in case you thought I missed a vowel. And they are nothing like the North America macaroons, all gooey with coconut. Much, much better.

Posted by A Gift Wrapped Life at 7:35 AM 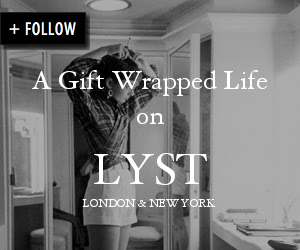