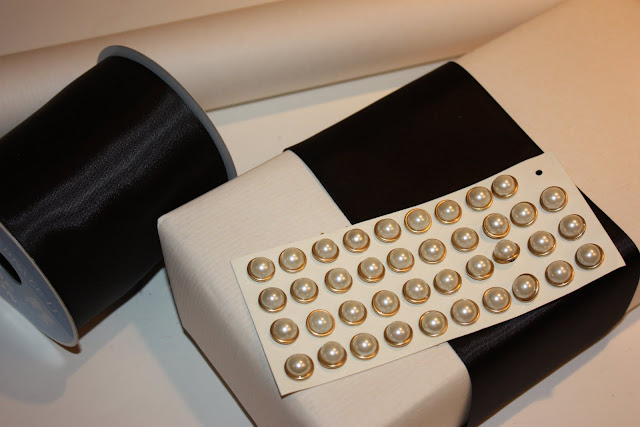 I am on Day 2 of my self-imposed Summer Camp Gift Wrap challenge, the challenge I introduced yesterday using limited materials found in one spot. One of my favorite details when I was an active interior designer was to detail furniture or drapery valances with studs. I particularly fancied pewter studs on natural linen so when I was at Michaels I was looking for something that would let me experiment with this idea on ribbon. 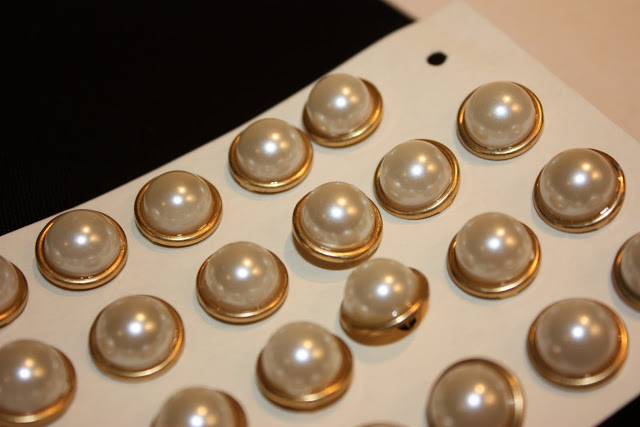 I found these pearl embellishments from the Brides line of bridal embellishments (at Michaels) that I thought would do the trick, especially with a neutral gift wrap colour scheme of black and ivory. I think these are intended to embellish bridal invitations but were reasonably priced at $6.69 for a package of 40. And no, I am not working for Michaels, it just happens to be our only craft store and one that is seen on both sides of the border. 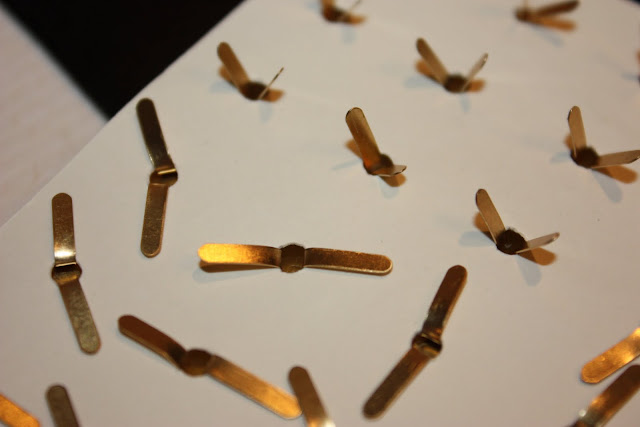 Ribbon generally doesn't like to be poked, it pulls the threads lengthwise and can obviously detract from a gift tied with beautiful ribbon. I would suggest cutting a small length of ribbon and practise your poke technique before you do your final ribbon. I am not sure but it appears the more expensive the ribbon, the more apparent the flaws. As I mentioned yesterday this is a 4" wide polyester ribbon and it seemed to handle this poking much better than when I have tried it on silk satin ribbon. Yes, I actually poked through a whole package of these pearls and though it isn't hard, it does require a somewhat careful hand to line them up and minimize the thread pulls. The threads did pull but with this many it almost became a pattern into itself. Black is a good choice of ribbon colour for this technique to minimize this. Any other colour is going to show too much. 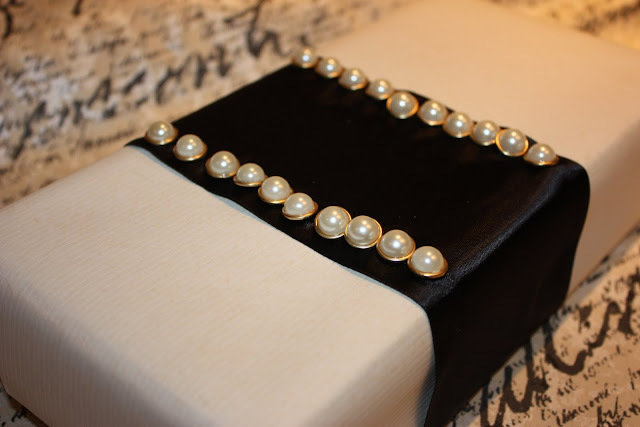 I began by temporarily taping down one edge of ribbon to the box underside (leaving extra to cut off the flawed scissor cut I talked about yesterday once I was done with the stud placement). I was strictly working by eye in placing the studs, I might recommend marking the ribbon with a pencil dot to line up more precisely. In order to do this stud poking you are handling the ribbon quite a bit so use a light hand to avoid excess wrinkling. I might be scaring you off this technique, but it is rather easy once you get going. Don't be too concerned about absolute perfection and you can see that they move about anyways. Bring the pearl studs in enough on the ribbon so that the brass stays on the back won't peek out under the ribbon edge. You could stop right here with the pearls in two lines but while I was at it............. 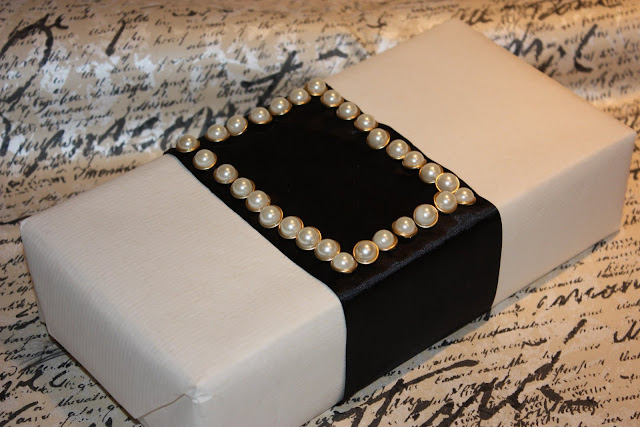 .........and since I had enough remaining studs I just kept going to make a rectangular pattern though this became more tricky to line the studs up on all four sides. I am not sure how often I would do this technique but I did think it was a creative way to present a gift without a bow and yet still have some elegance and show effort. And a good way to use up those studs, even the generic brass ones from the office supply. I will be re-visiting this idea again in future posts. See you tomorrow.
All photos by Sande Chase ~ A Gift Wrapped Life
Posted by A Gift Wrapped Life at 5:08 PM